Do you remember your first face-swap? I do. I had just started working at Reface and wanted to check how the face-swapping technique works. So I took a selfie and swapped my face on some random guy’s face in a video from the app.

At first, I was amazed, like many people who get to see their faces on other people, especially their favorite celebs. But then, suddenly, I felt a bit weird looking at my somehow plastic face with slightly unnatural movements.

My reaction was, “That’s creepy!” I felt nauseous and scared for a moment. It was not exactly “scared,” but it was an intense feeling from the depth of my subconsciousness that just appeared from out of nowhere.

I never thought a short AI-generated video with my own face could cause such an intense effect. I suddenly thought of the Uncanny Valley. Hello, the ancient fear! Why does this video creep me out but I like it at the same time?

Can we as a species enjoy something that evokes such strong and controversial feelings? Or maybe we’ve already been enjoying it for quite some time

What is the Uncanny Valley?

Let's set it straight. The Uncanny Valley is when a person looks at anything human-like (a humanoid robot, lifelike doll, etc.), and experiences a sense of unease, fear, and repulsion. In other words, a sense of the uncanny.

The Uncanny Valley effect was coined in 1970 by Japanese robotics professor Masahiro Mori. According to his concept, humanoid objects may cause eeriness, disgust, and strange feelings because of their imperfect resemblance to human beings.

And the reasons?
No one actually knows. There are a few hypotheses as to why this happens:

One of my favorite things about the subject I’ve seen on the internet so far is this tweet:

AI is in the house

A couple of years ago, Wired magazine dropped this article saying that AI is actually killing the Uncanny Valley. I’m not sure if it’s 100% true, but the fact is, we are surrounded by creations that mimic people and the real world around us more than ever before.

The 21st century is the age of AI. We have Siri, Alexa, Google Assistant, and many other AI-based voice assistants. We have virtual Instagram influencers like Lil Miquela. Music composed by AI? There you go.

Some people experience the uncanny valley effect when interacting with AI. For example, AI chatbots make some people feel uncomfortable when they realize it is not a human being they’ve been chatting with.

But does this fear have a future when we live in a world of objects mimicking humans? Will the uncanny valley evolve, or is Wired right, and this charming phobia will just dissolve in the overwhelming reality of digital and physical lifelike dolls and bots?

It all started with fear and amusement with human-like masks when I was a kid. Then there were fascinating and repulsive mannequins. And one day I saw automatons (self-operating machines that automatically follow a predetermined sequence of operations) on TV. I was stunned by their sick (in my eyes, of course) beauty. By the way, the fear of human-like figures is called automatonophobia.

Check out this short video about automatons, the original robots, and see for yourself how creepily beautiful they are:

Maybe we just need to get used to all of the dwellers of the uncanny valley. The human-like robots who look even more human than humans. The life-like AI sex dolls, and AI assistants (or even two in one). Super realistic masks and mannequins. They are not a threat.

Our culture is full of examples of objects mimicking humans. They are not dangerous. They are amazing and a bit creepy.

Just look at a few cases below and tell me you can’t feel what I’m saying:

It's a parody page of Humans of New York. Imagine the Big Apple full of bots: serious, funny, stylish, and corny. And they tell their stories. This is what it's all about! All of the images and texts are AI-generated. "One bot at a time." You can't go wrong with it, trust me

An AI called Huxley created this video. Huxley is “a unique dreamer whose ‘mind’ has been modeled after the cognitive and emotional processes of humans.” Artists claim this collaboration to be the first of its kind. Check out these disturbing and beautiful images an artificial intelligence has created to go along with a beautiful song

And here we go with the good old masks. They are so realistic that they are the real rivals for the uncanny robots

Olga’s 3D works of art are the hyperrealistic, painfully familiar samples of lives of people you’ve met at a rave or in a parking lot though they have never existed. It’s like a mix of GTA, your neighbors’ drama, and the adventures of a drunk Instagram influencer with guns

Harmony is an AI sex robot ❤️
PS - a kinky bonus for y'all: a solid text about sexbots and everything you need to know about them

Okay, Siri, so why was I afraid of AI and my face-swap?

I think it’s all about two moments:

Both statements are as wrong as they’re typical, unfortunately.

It might hurt me. Automatons and AI assistants don’t want to hurt people. It’s always the people who hurt. So was I just being xenophobic at some point? Perhaps.
It's unlovable. I think I can love it once I see a personality in it. This personality is based on many people's efforts and creative legacy. Is it enough? Enough is something human beings don’t know.

Okay, maybe I’m not ready to love it so far. Anyway, love is a pretty loud word, and this whole idea is a topic for a new article (if my editor lets me do it, lol).

And here is a beautiful, funny, and uncanny classic video for the perfect outro. Stay safe, keep it real and AI. See ya! 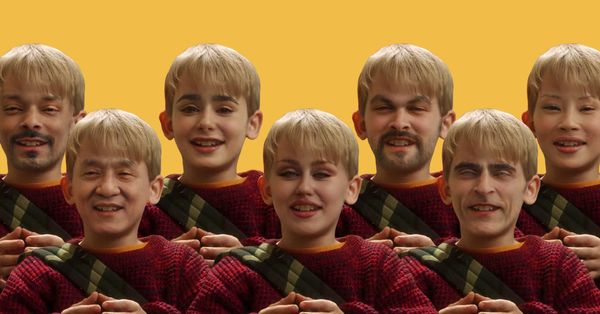 To future generations — with gags